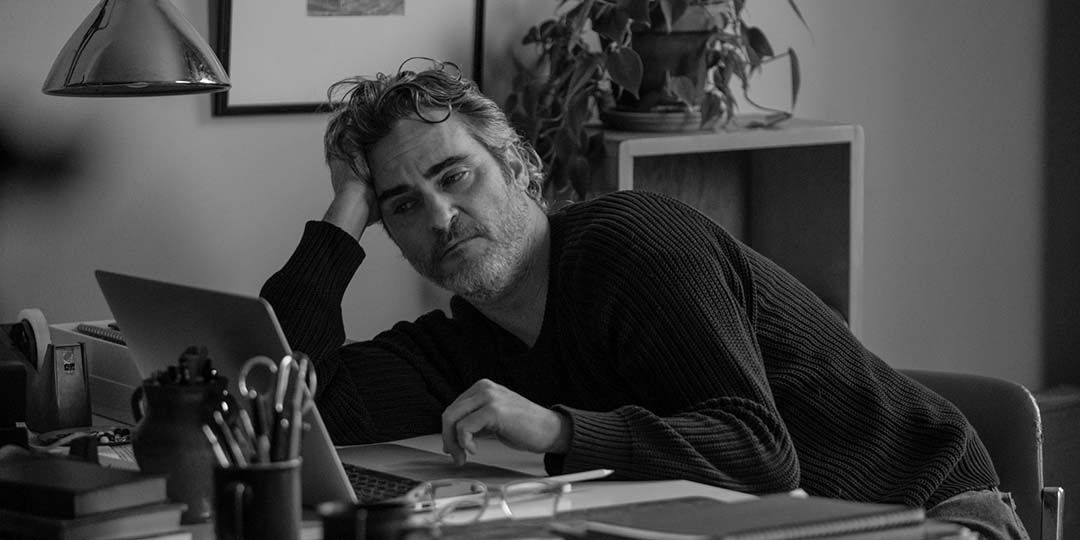 Currently playing in theaters is the new comedy-drama ‘C’mon C’mon’ from writer and director Mike Mills (‘Beginners’). Shot in black-and-white, the film stars Academy Award winner Joaquin Phoenix (‘Joker’) as a documentary journalist who agrees to take care of his estranged sister’s son while she helps her ex-husband, who is battling mental illness. In addition to Phoenix, the film also stars Gabby Hoffman (‘Field of Dreams’), Scott McNairy (‘Batman v. Superman: Dawn of Justice’), and newcomer Woody Norman. The result is a sweet and emotional film, beautifully directed by Mike Mills, and featuring a quiet but strong performance from Joaquin Phoenix.

‘C’mon C’mon’ stars Joaquin Phoenix as Johnny, an NPR-type radio journalist traveling the country interviewing children about their hopes and dreams. He hasn’t spoken to his sister, Viv (Hoffman), since their mother died, but suddenly receives a call from her. She asks Johnny if he can come to Los Angeles and take care of her nine-year-old son, Jesse (Norman), while she goes up state to help her ex-husband (McNairy) who suffers from mental illness. Jesse is a very obnoxious young boy and gets on Johnny’s nerves as he continuingly asks him to talk about his personal life, which he is reluctant to do. When Paul’s condition worsens, and Viv is forced to stay longer, she agrees to let Johnny take Jesse to New York and eventually New Orleans, so he can finish his work. As the uncle and nephew begin to form a deep bond, Johnny starts to open up to Jesse about his past, why he hasn’t spoken to Viv since their mother’s passing, and why he isn’t married. Johnny also learns the challenges of raising a young child and worries that Jesse may one day suffer from the same issues as his father.

Writer/director Mike Mills is probably best known for his 2010 film ‘Beginners,’ which earned Christopher Plummer a Best Supporting Actor Oscar, as well as his 2016 movie ‘20th Century Woman,’ which earned Mills an Oscar nomination for Best Original Screenplay. ‘C’mon C’mon’ is similar to ‘Beginners,’ as it is a character driven drama about estranged family members who come together over adversity. Mills has a wonderful ability of getting very touching and emotional performances from his actors, and the choice to shoot in black-and-white gives the movie a specific style that is more intimate than using color. Mills allows the audience to feel like they are in the room with the characters, understanding their emotions and motivations. Mills also navigates the subject of mental illness well, with respect, dignity and class.

The screenplay is fantastic, with honest dialogue that is extremely relatable. Mills made an excellent choice in having Phoenix’s character be a documentary journalist whose latest project focuses on children. This allows an interesting contrast between Johnny talking to children for a living, and then struggling to communicate with his own nephew. It’s also interesting that Johnny asks others to open up about their personal lives, but yet is so guarded around his own family. Interestingly, Molly Webster, who plays Johnny’s co-worker Roxanne, is the real-life Senior Correspondent for WNYC’s Radiolab, which might explain why the podcast scenes seem so realistic. As he did with ‘Beginners,’ Mills shows a side of Los Angeles that is not often seen on screen, shooting in the quiet suburbs rather than the concrete jungle of downtown. The music in the movie is also excellent, with a lovely score by Aaron and Bryce Dessner, not to mention Robbie Ryan’s phenomenal cinematography.

Young actor Woody Norman plays a challenging and pivotal role as Jesse, as most of the film’s drama revolves around him and his relationship to Johnny. The character must be both annoying and loveable at the same time, a difficult performance for any actor to pull off, and Norman excels at it. While Jesse is obnoxious at first, you sympathize with his situation and begin to fall in love with the character the same way Johnny does. Actor Scoot McNairy has a very small role, but it is also pivotal, playing Jessie’s dad and struggling with mental illness. McNairy delivers a great performance, even though he is on-screen for a short amount of time. Actress Abbey Hoffman gives a terrific performance as Viv and is great opposite all three of her male co-stars. You really sympathize with her character when she is dealing with her ex-husband’s disease, and you also feel her equal frustration and love for Jessie. But her strongest scenes are with Phoenix, as the mystery of their estranged relationship is at the core of the film’s story.

But the movie really belongs to Joaquin Phoenix, who, coming off his Best Actor win at the Academy Awards for ‘Joker,’ gives another commanding and extremely vulnerable performance. As Johnny, you really get the idea that Phoenix is showing us the real “Joaquin,” or at least as much as the enigmatic actor is willing to. Phoenix is known for disappearing behind a role, like in ‘Joker’ or ‘The Master,’ but there is nowhere to hide in ‘C’mon C’mon’ as the actor wears his heart on his sleeve in almost every scene. Phoenix is also great working off of Norman’s manic energy, as well as creating a mysterious past with Hoffman’s Viv, which is reveled in flashbacks. While Phoenix has several strong scenes with Norman, his best comes towards the end of the film, when Jesse has finally worn Johnny down, and he tells him about the love of his life and how he lost her. Phoenix is at his rawest in this moment and is completely in command of the scene.

In the end, ‘C’mon C’mon’ is a throwback to the classic independent films of the 90s and is an emotionally heartwarming movie with stellar performances from Phoenix and the rest of the ensemble cast. While it is definitely a long shot in the upcoming awards season, I wouldn’t be surprised if Phoenix’s performance is rewarded with an Oscar nomination, as well as a Best Original Screenplay nom for Mills. But even if the Academy does not recognize the film, I expect it will nab quite a number of nominations at the upcoming Independent Spirit Awards.

A documentary filmmaker whose latest project involves gifted children bonds with his smart-yet-sensitive nephew, whose father struggles with bipolar disorder and... Read the Plot

Read The Unforgivable | Movie review by The Upcoming

‘Mrs. Doubtfire’ review: Bringing the movie to Broadway was a huge mistake

No comments to show.